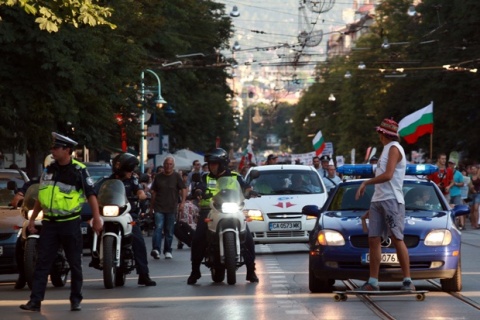 Thousands of citizens staged Wednesday evening another protest rally against the amendments to the controversial Forestry Act.

According to different Bulgarian media, their number has been anywhere between 3 000 and 5 000.

The demonstrators gathered this time in front of the building of the National Palace of Culture, NDK, in downtown Sofia and then marched all the way through the main "Vitosha" boulevard by the buildings of the Presidential office and the Council of Ministries to the one of the Parliament where their meeting was held.

The rally ended without any violence or clashes with riot police.

The leaders of eco organization appealed to all who care about the future of the country to follow the official internet site of the Parliament where the proposals of Members of the Parliament and environmentalists are being published. The nature lovers are alarmed by some proposals that include the idea to allow private investors to obtain building rights on public-State property.

Before the march, the people gathered near NDK signed a petition against police brutality.

Thousands of Bulgarian eco activists and other citizens opposing the Forestry Act have been staging protest rallies in the area of the key intersection of Orlov Most (Eagles Bridge) in Sofia ever since the Parliament passed the amendments 8 days ago, on June 13. On Sunday they went to the location to plant flowers after being accused by Interior Minister, Tsvetan Tsvetanov, of destroying the nearby green areas in the central Borisova Gradina Park.

On Saturday Bulgarian President, Rosen Pleveneliev issued a veto on all of its texts.

Two counter protests of people backing the amendments to the Forestry Act were held in southwestern Bulgarian on Sunday and on Monday. The protests are widely-believed to be staged by The "Nature for People and Regions" coalition funded by notorious businessman Tseko Minev. The E-79 road to Greece was blocked for about 15-20 minutes on both days.

Meanwhile, the environmentalists announced they are withdrawing from negotiations focused on the Forestry Act with the business and those in power, after reaching stalemate on Monday, Tuesday, and Wednesday.