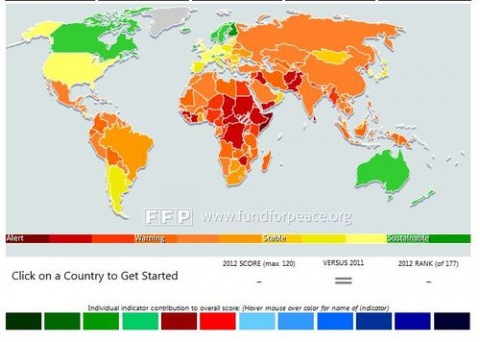 Bulgaria is the 130th most failed state in the world, according to 2012's Failed State Index published by The Fund for Peace.

The only European Union member state that is deemed more failed than Bulgaria is Romania (126th).

For a fifth year in a row, the index is "topped" by Somalia. The East African country is followed by the Democratic Republic of Congo and Sudan.

As compared to 2011, Bulgaria's rank has improved by 2.7 points, reaching 59.0. The Balkan country is the 8th most improved in the world.

The greatest worsening was that of Libya (a 16.2 point year-on-year rise from 2011), as the country endured a civil war, sustained NATO bombing and the overthrow and assassination of Colonel Muammar Gaddafi.