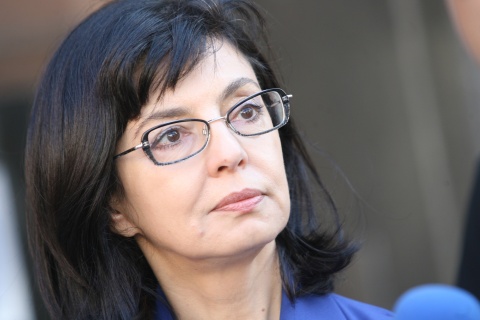 In a Monday interview for the Bulgarian National Radio (BNR), she said that Borisov had misled the people about the Judiciary Act and about the Forestry Act in a mere two days.

Regarding the amendments to the Judiciary Act, which were vetoed on June 15, she explained that the changes had been adopted with Borisov's approval but he had subsequently grown scared of the public response and by the response from the European Commission and had decided to change horses in midstream.

Kuneva argued that it had been a clumsy move on the part of Borisov to show that Plevneliev had imposed the veto at his instruction.

The presidential decree does not cover a provision allowing the current VSS members to appoint the next Chief Prosecutor, nor the EC-recommended direct appointment of VSS members by all magistrates rather than by delegates.

"The second time he lied was about the amendments to the Forestry Act. He obviously promised ski lifts and ski runs to a bunch of oligarchs but he once again got scared by the public response and he backed off. I do not see the people or justice among his priorities. The fact that he can strike a bargain with everybody in Parliament does not help people," Kuneva added.

She claimed that Borisov was attempting to administer justice single-handedly, thereby rewriting his CV and the CV of his political opponents.

The former EU Commissioner went on to comment Borisov's remarks that he would not consider accusation of being anti-democratic and of trampling on the interests of Bulgarian nature voiced by the opposition or by children or relatives of politcommissars at the former Politburo of the Bulgarian Communist Party.

Kuneva, whose father-in-law is Ivan Pramov, former member of central committee of the Politburo of the Bulgarian Communist Party, suggested that the statement had most likely been thrown at her, despite the fact that it did not mention names.

She called on Borisov to stop applying double standards, stressing that his former live-in girlfriend, famous banker Tsvetelina Borislavova, and his former wife, were also daughters in law of senior Politburo officials.