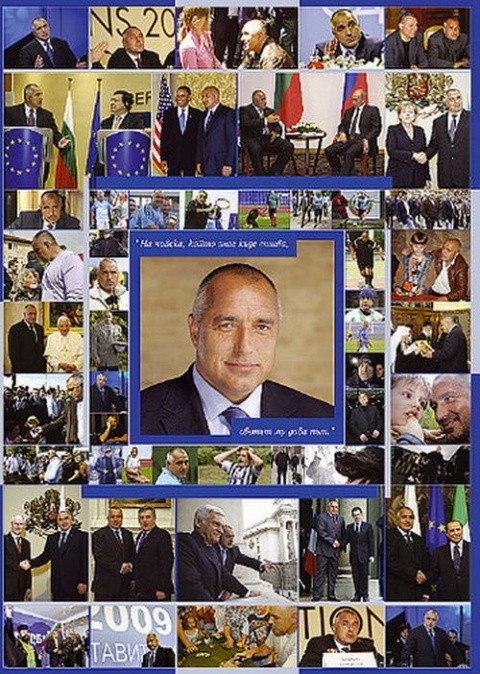 "The world makes a way for a person who knows where he is going," reads the collage that the GERB party headquarters presented to Borisov for his birthday in 2011. Photo by BGNES.

Bulgarian ministers, functionaries of the ruling party GERB, and aides, among others, are going to shower once again with gifts Prime Minister Boyko Borisov on his birthday.

Borisov's closest aide, his Deputy and Interior Minister Tsvetan Tsvetanov, will present him with a week-old life calf. The inventive present has been prepared on Tsvetanov's requests by farmers from northwestern Bulgaria and is to arrive in Sofia Wednesday, according to the Bulgarian Standard daily.

The farmer whose cow gave birth to the calf is named Tsvetan like the Interior Minister. The baby calf, however, still does not have a name. Standard writes that there are several possible options, all revolving around Borisov's top adversary – the leader of the main opposition formation, the left-wing Bulgarian Socialist Party, BSP, Sergey Stanishev.

Some possible names for the calf were Sergey or Stanishko (a nickname used often), but Borisov will have the last word.

The Members of the Parliament from Borisov's Citizens for European Development of Bulgaria party, GERB, however, are keeping their present in deep secret in order to surprise the boss, and prevent him from finding out from the press what he will receive, says the Chairman of the GERB Parliamentary group, Krasimir Velchev.

Another gift that has been disclosed is the one of Health Minister, Desislava Atanasova, who has prepared a symbolic token related to the newly-introduced full smoking ban in Bulgaria. Atanasova will give Borisov an electronic cigarette.