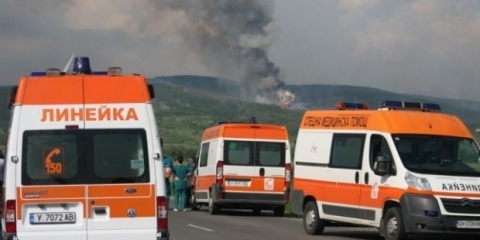 Medical units from the local hospitals and Sofia were rushed to the site of the privately-owned ammo depot which exploded in Southeastern Bulgaria one week ago. Photo by BGNES

Bereta Trading, owner of the blasted ammo depot in southeastern Bulgaria, announces Tuesday it is beginning to repair explosion-damaged residential and public buildings.

The company has signed a contract for repair works with a construction company to replace broken windows, doors, and ceilings, among others.

The mayors of the villages of Lozenets and Gorno Alexandrovo have been notified about the upcoming construction activities.

On Tuesday, June 5, a series of explosions occurred at a private-owned ammo site near the Petolachkata road junction close to Sliven, injuring 9 people, two of them critically, all currently upgraded to stable. Three of the ammunition depot's employees went missing and were officially declared dead Friday by the Chief Secretary of the Interior, Commissar Kalin Georgiev.

Earlier Tuesday, the Yambol regional prosecutor declared that human remains found at the site were confirmed by DNA analysis to belong to one of the three workers.

The Mayor of the municipality of Stradlzha, Mitko Andonov, has demanded urgent State help for the areas affected by last week's explosions.

The blasts have damaged 178 residential buildings, 32 public ones, 68 stores and other commercial space, 5 industrial shops, and the water pump providing water for the town of Straldzha and three nearby villages.

The damage at the mountain cabin "Lyulyak" is yet to be assessed since the building is still inaccessible.

It remains unclear how many hectares of forests have been affected, but over 7 000 dekares of farm lands cannot currently be cultivated over the threat of dispersed unexploded ammo.

The wheat harvest is currently impossible, while wine yard owners are also expected to sustain losses since they are prevented now from spraying and expect lower quality grapes.