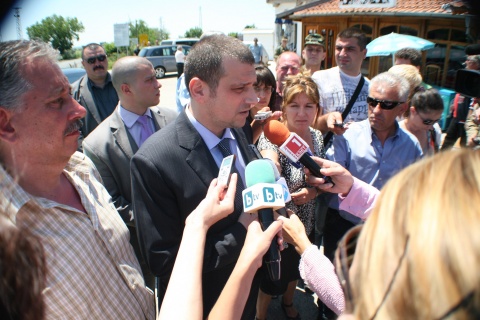 Bulgarian Interior Secretary Kalin Georgiev near the spot of the blasted ammo depot. Photo by BGNES

The Bulgarian authorities have confirmed the death of three workers caused by the explosions at an ammunition depot near Sliven in Southeastern Bulgaria on Tuesday, June 5, 2012.

Georgiev is to meet with the relatives of the three men at the order of Interior Minister Tsvetan Tsvetanov, he added.

The commissar further announced that the authorities have decided to confirm the deaths of the three missing workers before the completion of the DNA results of the body parts that rescue teams found on the spot of the blasted ammo facility since experts have declared that there is no hope whatsoever to discover anybody alive.

The Interior Chief Secretary told BNT Friday that the explosions created a 4-6-meter deep crater at the spot of one of storage houses of the ammunition depot, with the entire area resembling a "lunar landscape".

Investigators from a number of relevant institutions have been conducting searches and tests on the ground, Georgiev added, saying also that insurance companies are going to send representatives to check out the damage suffered by the owner at the start of next week.

On Tuesday, a series of blasts occurred at a private-owned ammo site near the Petolachkata road junction close to Sliven, injuring 9 people, two of them critically, all currently upgraded to stable.

Relatives of those who were injured from the explosion told journalists that people close to the owner of Bereta Trading company, which manages the depot, have pressured them to keep silent before the media and offered them money in exchange.