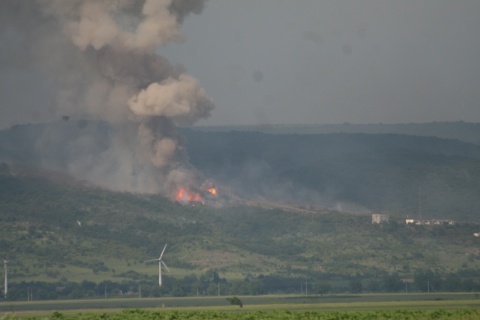 The incident in which an ammunition depot exploded near the city of Sliven in Southeastern Bulgaria Tuesday afternoon has caused a minor earthquake in the region, the Bulgarian Academy of Sciences announced.

According to Prof. Nikolay Miloshev, Director of the Geophysics Institute at the Bulgarian Academy of Sciences, the blasts near Sliven caused an earthquake with a magnitude of 1.5 on the Richter Scale.

His statement came early Tuesday night, after earlier the Bulgarian Academy of Sciences announced it had registered no earthquake that might have caused the blasts. Meanwhile, the blasts did cause panic among the local population, with the people mistaking the explosions for an earthquake in the wake of the 5.8-6.0-magnitude earthquake that jolted Sofia and Western Bulgaria on May 22, 2012.

Shortly before the blasts at the Bereta Trading depot near Sliven, however, at 2:35 pm on Tuesday, the Bulgarian Academy of Sciences detected a 2.4-magnitude earthquake with an epicenter close to the town of Elhovo, some 60 km to the south of the region of Sliven and Yambol and the site of the exploding ammunition facility.