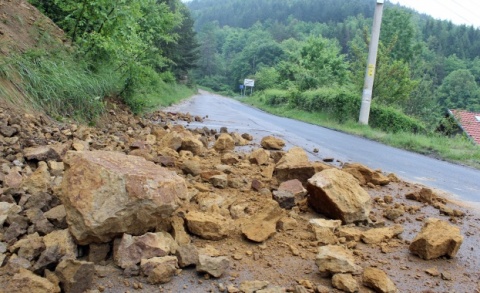 Traffic is impeded on a number of roads in Bulgaria over landslides triggered by downpours. File photo

Several roads, among them some key ones, are partially closed across Bulgaria Tuesday due to landslides in the aftermath of long-lasting torrential rains.

The "Petrohan" mountain pass in the Stara Planina range was temporarily closed after a phone call was placed early Tuesday morning to the 112 emergency hotline notifying about a large pile of rocks on the road. One lane is now open for traffic, but drivers are warned to exercise extreme caution.

The same warning has been issued for the other Stara Planina pass – "The Pass of the Republic." There is a landslide with rocks and fallen trees near the village of Pchelinovo, in the Stara Zagora region in the direction of the central city of Veliko Tarnovo.

Traffic is also impeded on a number of roads in the Rhodoppe Mountains over landslides, but all roads are open. Traffic police are asking drivers there to also be extremely cautious.