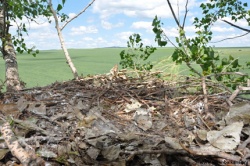 One of the two imperial eagles' nests left empty after being robbed by unidentified persons. Photo by Zeleni Balkani

Two cases of robbed nests of the rare eastern imperial eagle in Bulgaria have been announced by the Zeleni Balkani environmental NGO and the Bulgarian Society for the Protection of Birds.

During a regular monitoring of the 23 imperial eagle couples nesting in Bulgaria, in the country's wild south-east, experts from Zeleni discovered one of the nests vacated by the birds and with no eggs.

Clear traces of human intervention were left at the site - tracks from automobile tyres, flattened grass and marks of ropes used to climb on the tree.

A similar case was uncovered a couple of days ago at a nest some 30 km away by the Bulgarian Society for the Protection of Birds.

In that case, there were the same types of signs showing that the eggs have been removed from the nest by humans.

The two environmental organizations have alerted the police, which reacted swiftly and gathered and systematized the evidence present at the sites.

Recently the Bulgarian Society for the Protection of Birds had happily announced the hatching of the first young eastern imperial eagles in Bulgaria for 2012.