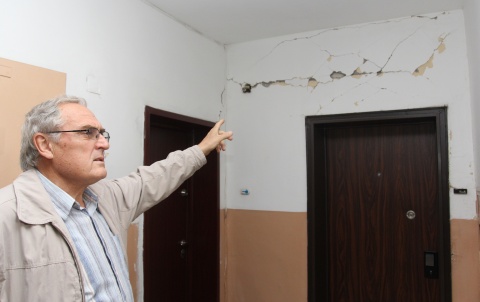 A 5.8-magnitude earthquake shook Sofia, Pernik and nearby rural areas early on Tuesday. Photo by BGNES

Authorities keep assessing the damages caused by the 5.8-magnitude earthquake that jolted Bulgaria's capital in the small hours of Tuesday.

An earthquake with a magnitude of 5.8 on the Richter scale shook Bulgaria's capital early on Tuesday.

In Sofia, Block 251 in the Borovo residential district suffered the heaviest damage. The walls of the building are cracked and all of the inhabitants have been evacuated. The two units of the administrative building of the National Palace of Culture (NDK) in downtown Sofia have come apart.

In Pernik, the chimney of the Pernik Thermal Power Plant (TPP) collapsed. The TPP has been closed for an indefinite period, according to reports of the Bulgarian National Radio (BNR). The tiles on the wall of the municipal administration building have fallen off. The Rudnichar, which has a majority Roma population living in rickety homes, suffered the most damage. One building has collapsed completely, a number of others partially. The the St. Ivan Rilski church in the heart of the town has been seriously damaged and its dome has developed cracks. In the Tsarkva ("Church") residential district, there are a number of partially collapsed houses and torn down chimnets. The controlled release of water from the Studena dam has started. Interior Minister Tsvetan Tsvetanov has assured that the dam wall did not suffer cracks during the earthquake. There is no danger of overflow for the nearby Pchelina dam. Pernik reportedly suffered the most recent aftershocks measuring around 3 on the Richter scale at 6.20 a.m. and 7.10 a.m. on Tuesday.

In the southwestern city of Blagoevgrad, the jolt struck the 22-meter chimney of the surgery block, causing debris to fall. Fortunately, nobody was injured.