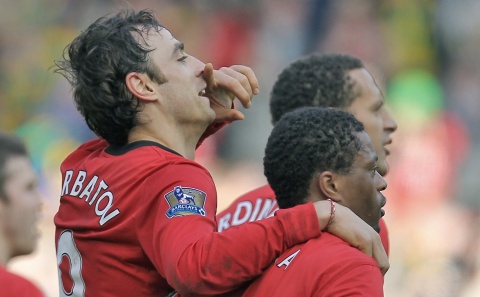 Bulgarian star striker, Dimitar Berbatov, is set to leave Manchester United in the summer, after a disappointing season when he was forced to spent most games on the reserves bench. Photo by BGNES

The sports manager of the Turkish football team Galatasaray, Bulent Tulun, has revealed that the club's negotiations with Bulgarian star striker, Dimitar Berbatov, have reached an advanced stage.

The news was reported Monday by the Bulgarian Standard daily, citing Turkish press.

"We are leading negotiations with players who will contribute very much to raising the level of our club. Berbatov is one of them. I would not want to tell now the names of the players we are close to signing contracts with. Negotiations with Berbatov are in an advanced stage," Tulun is quoted saying.

It seems 100% certain that the Bulgarian striker is going to leave Manchester United in the summer, after a disappointing season when he was forced to spent most games on the reserves bench.

Galatasaray have expressed strong interest in having Berbatov on several occasions, the last one in November 2011, when they came close to a contract. The latter fell through over the transfer amount deemed too low at the time.