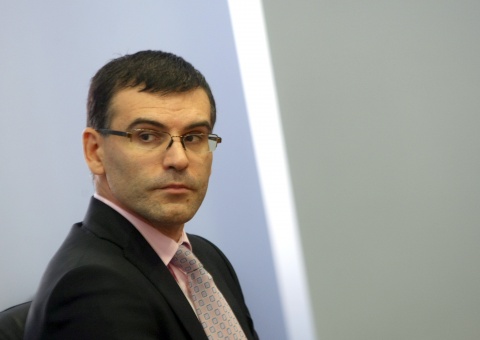 Deputy Prime Minister and Finance Minister, Simeon Djankov, is the mastermind behind the plan to move State institutions from the capital to other Bulgarian cities. Photo by BGNES

The relocation of State structures from the capital Sofia to other Bulgarian cities would not cost much, according to Deputy Prime Minister and Finance Minister, Simeon Djankov.

Djankov made the statement during a visit to the Danube city of Ruse, saying that the cost of BGN 100 000 to 150 000 per agency was pocket change compared to the huge and positive social and economic effects from such plan.

He stressed once again on the international experience which has proven that such initiative is very beneficial for regional development.

A week ago, Bulgaria's Prime Minister Boyko Borisov first revealed that some agencies, including units of the Ministry of Economy, Energy and Tourism, and Ministry of Agriculture, will be moved to second largest city Plovdiv.

Djankov, who is the mastermind of the plan, explained that about 20 State agencies will be moved out of the capital by the summer of next year, including relocating the headquarters of the Customs Agency to the Danube city of Ruse.

The Finance Minister also informed that the agencies' equipment and furniture can be moved by using the State railroads BDZ Holding and talks about it have already been held.

According to Djankov, the first Customs directorates will be in Ruse by September 2012. He says that about 550 people now work at the Customs headquarters and the move would not lead to layoffs.

"And if someone decides to stay in Sofia, his or her position would be taken by a Ruse resident," he pointed out, adding Ruse might house a second agency as well, but this still depended of negotiations with municipal and regional officials.

The right-wing Blue Coalition has strongly opposed the idea in an official declaration.

Economists in Bulgaria have already stressed that it would be much better for the State servants to work online instead of relocating their offices.