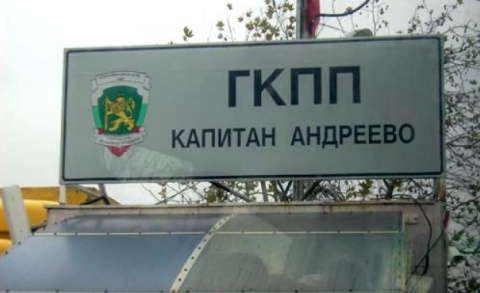 A large number of Customs officers at the Kapitan Andreevo checkpoint on the Bulgarian-Turkish border have been exposed for racket and contraband. File photo

Bulgarian Customs officers at the Kulata cross-border checkpoint with Greece have seized overnight one million pieces of contraband cigarettes.

The cigarettes have been hidden in a special compartment of a truck with Bulgarian license plates traveling from Bulgaria to Greece. The compartment was on the truck's bed, under a load of iron rods. A pre-trial legal procedure has been launched, which was the third one in the last 24 hours for the Customs in southwestern Bulgaria.

The others involved two other cigarette smuggling attempts – one through Kulata again (12 800 pieces) and the other at the Zlatarevo cross-border point (5 000 pieces), both hidden respectively inside the spare tire and the doors of automobiles.

Meanwhile, Bulgarian Customs officers on the Danube Bridge between Bulgaria and Romania in the north busted 3 570 boxes of contraband cigarettes in a passenger bus traveling from Romania to Greece. The Romanian driver has been arrested and pre-trail proceedings have been launched as well.

The Customs officers at the Kalotina cross-border point between Bulgaria and Serbia had found skimming devices in a sealed envelope under the seat of an automobile driven by a Bulgarian citizen, along with headphones, flash drives, cables and several players in the trunk.

The news about the successful busts of contraband items comes in the aftermath of a special police operation codenamed "Customs," which was carried out by the police and the prosecutor's office.