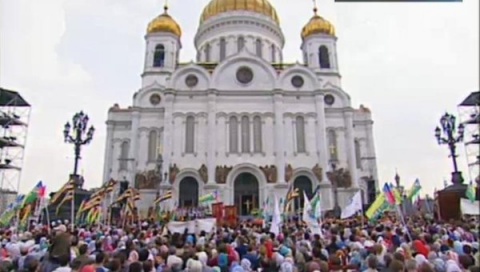 Thousands rallied before the Christ the Saviour Cathedral in Moscow to defend the Russian Orthodox Church from "desecration". Photo by RIA Novosti.

Thousands of Orthodox Church believers gathered at Moscow's Christ the Savior Cathedral for a nationwide prayer "in defense of the faith and desecrated sacred objects" on Sunday.

Russian Orthodox Church head Patriarch Kirill held a liturgy in downtown Moscow's Christ the Savior Cathedral, during which he urged believers to take part in the nationwide prayer outside the Cathedral "for our faith, our Church, our sacred objects and our Motherland," as cited by RIA Novosti.

The Russian news agency says that Vandalism and church desecration cases have become more frequent in Russia after the female Pussy Riot punk group members, currently held in detention in Moscow, performed what it called "a punk prayer" in February next to the Christ the Savior Cathedral's main altar, which is off-limits to all but priests.

Five masked members of Pussy Riot performed a protest song entitled "Holy Sh*t" at the altar of the Christ the Savior Cathedral in downtown Moscow on February 21. The lyrics included lines such as "Holy Mother, Blessed Virgin, chase Putin out!"

Russian Patriarch Kirill said on Sunday he hoped the nationwide prayer would "multiply our spiritual strength" to fight against faithlessness.

Russian bishops and priests led by Patriarch Kirill prayed together with Orthodox Church believers in front of sacred objects outside of the cathedral, including ones that were recently desecrated by vandals.

Separate prayers were also held in front of other Russian cathedrals. Priests and believers also prayed that those who desecrated sacred objects in a series of recent blasphemous actions across Russia change their ways, and for good reputation of the Church.

The Russian Church has been involved in a number of high-profile scandals recently, RIA Novosti says. Top Church officials have been criticized by bloggers and opposition media for their "lavish" lifestyles.

The Church's Supreme Council said in a statement earlier this month that it had been targeted by "those pushing through radical liberal values" over its opposition to same-sex marriages and consumerism.

Pussy Riot have explained their performance was a response to Orthodox Church head Patriarch Kirill's backing of President-elect Vladimir Putin in the run-up to his landslide March 4 election victory. The patriarch called the 12 years of Putin's rule a "miracle of God" in a televised meeting.

An opinion poll released on Monday by the Russian VTsIOM state pollster indicated that a mere 10 percent of Russians want to see the suspects remain behind bars. Just over half of the respondents favored community work or a fine.