Levon Helm, The Band Drummer and Singer, Dies at 71 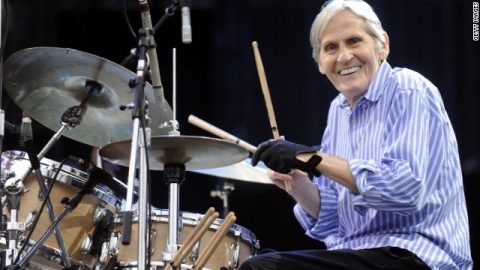 Helm performs as part of the Austin City Limits Music Festival at Zilker Park in Austin, Texas, in 2009. Photo by Getty Images

Levon Helm, the legendary drummer, multi-instrumentalist and singer for the popular American rock-and-roll group The Band, died Thursday after losing his long battle with throat cancer.

"He was surrounded by family, friends and band mates and will be remembered by all he touched as a brilliant musician and a beautiful soul," a statement from his record label, Vanguard Records, said.

A statement from the Rock and Roll Hall of Fame, which inducted Helm in 1994, called him the backbone of The Band.

"As a member of the one of the most influential rock and roll groups, The Band, Levon Helm produced music that was as much timeless as it was timely," it said. "In the late 1960s and early 1970s when the country was divided, The Band still projected a sense of unity and brought generations of fans together from all over the world."

The Band was a four-fifths Canadian ensemble whose music in the 1960s and '70s, some of it with Bob Dylan, endures as a high-water mark of quintessential American rock-and-roll.

Helm is best known for providing the vocals to such rock 'n' roll standards as "The Weight" and "The Night They Drove Old Dixie Down," with his Southern, soulful and gritty voice.