Bulgarian Church in Istabul First Time Ever Closed on Easter 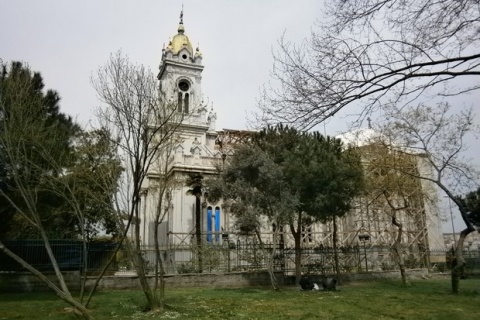 The Bulgarian Church in Istanbul St. Stefan is made of 500 tons of iron. Photo by Darik Radio

The unique Bulgarian iron St. Stefan in Turkey's Istanbul, the former capital of the Ottoman Empire, has seen no Easter celebration for the first time in 113 years.

The church, which was originally built as a wooden church of the Bulgarian community in Istanbul in 1849, and was rebuilt as an iron church in 1890, remained closed on Sunday, the Bulgarian Orthodox Easter because of the uncompleted reconstruction that started in August 2011.

Thus, the iron St. Stefan church, which has been declared the most beautiful church in Turkey, remain closed on the largest Christian holiday for the first time since 1890, Darik Radio reported.

The reconstruction of the Bulgarian church in Istanbul was supposed to be completed on April 13, 2012; it was necessitated by a landslide which threatened to destroy the temple, which is made of 500 tons of iron.

The Bulgarian Bishop of Marcianople, Constantine, is quoted as saying that the skipping of Easter by the St. Stefan Church is no problem as long as it gets properly repaired.

At the same time, however, dozens of Bulgarian tourists who had no idea the historic temple would still be closed, arrived on the spot, and had to leave disappointed.

It remains unclear when the reconstruction of the Bulgarian iron church in Istanbul will be completed.