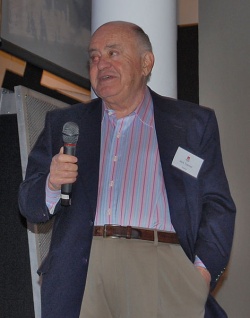 Jack Tramiel, a computer-industry pioneer whose Commodore 64 is widely considered the best-selling personal computer in history, died Sunday in California, his family said. He was 83 years old.

Tramiel was born as Jacek Trzmiel in ??d?, Poland, into a Jewish family.

After the German invasion of Poland in 1939 his family was transported by German occupiers to the Jewish ghetto in ??d?, where he worked in a garment factory. When the ghettos were liquidated his family was sent to the Auschwitz concentration camp. He was examined by Dr. Mengele and selected for a work party, after which he and his father were sent to the labor camp Ahlem near Hanover, while his mother remained at Auschwitz.

Like many other inmates, his father was reported to have died of Typhus in the work camp; however, Tramiel believes he was killed by an injection of gasoline. Tramiel was rescued from the labor camp in April 1945 by the 84th Infantry Division.

In November 1947, Tramiel emigrated to the United States. He soon joined the army, where he learned how to repair office equipment, including typewriters.

He founded Commodore as a typewriter importer, and in the 1960s manufactured some of the earliest electronic calculators.

After leaving Commodore in 1984, Tramiel acquired Atari from Warner Communications and transformed it from a maker of game consoles into a PC manufacturer.

Commodore introduced its first PC in 1977, the same year that competing units the Apple II and TRS-80 were introduced.