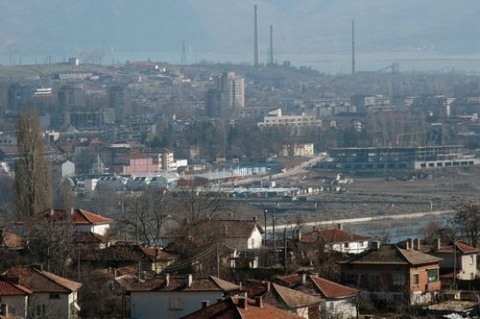 The Lead and Zinc Complex in Kardzhali (in the background). File photo

Workers of the Lead and Zinc Complex in Kardzhali, the leading Bulgarian non-ferrous metals producer, are blocking the main local road to the city of Haskovo during rush hour Wednesday morning.

The wave of recent protest was triggered by their long-delayed salaries, while the one on Wednesday comes in the aftermath of the personal visit of Prime Minister, Boyko Borisov, to Kardzhali. Borisov failed to deliver a firm solution for the salaries and the future of the plant.

Borisov and Economy and Energy Minister, Delyan Dobrev, departed at 2 pm Tuesday, leaving the workers at an ongoing protest rally, while the trade unions called an emergency meeting with the participation of the President of the Confederation of Independent Syndicates in Bulgaria, KNSB, Plamen Dimitrov, who arrived in the afternoon.

The labor unions say protests and road blocks will continue and threaten their escalation until workers get paid, regardless of where and how the money will be secured.

The syndicalists say the patience that Borisov recommended to them will last until Friday, while the decision on further actions would be made Monday. They also warn of looming mass quitting of workers.

The Lead and Zinc Complex is owned by Valentin Zahariev, now-former owner of the Gorubso Madan metal mines. Gorubso Madan miners finally received their overdue wages on Saturday after they had been staging protests for two weeks.

According to Dobrev, in the case with the Kardzhali plant, the State has no useful mechanism to pressure Zahariev, because the plant is not a State-granted concession. He, however, promised that the government will apply all effort to assist in finding a solution for the problem.

The Minister is also going to talk with Zhariev's creditors to find out their intentions. He says that as it was in Madan, poor management is to be blamed for the overdue wages of the workers at the Kardzhali plant.