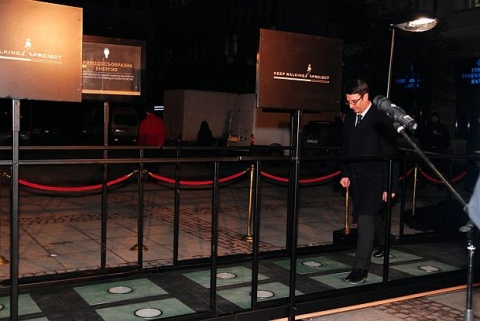 An innovative installation featuring Pavegen tiles, which capture kinetic energy from footsteps and convert it to electricity, was inaugurated Monday evening by Economy Minister Traicho Traikov.

The installation has been placed in front of the the National Theater "Ivan Vazov" in downtown Sofia and will stay there from March 06 until March 17.

"The energy that can be generated by an innovative technology like Pavegen is practically inexhaustible, but the cost of this energy is also important," Traikov noted.

He argued that it was all too clear that nuclear power plants and coal–fired power stations, as well as all traditional sources of energy, "will not give up without a fight", which he said was the main reason why "technologies that break down old business models need support".

Traikov pointed out that the distance between his office at the Ministry of Economy, Energy and Tourism was 250 steps that could generate around 1.5 KW of electricity.

He also drew attention to the fact that if all Bulgarians walked over at least one Pavegen slab, the move would generate as much energy as the output of the Tsankov Kamak hydroelectric power plant per hour.

The green pacing slabs, which are made from recycled rubber, were designed in 2009 by Laurence Kemball-Cook, a 25-year-old engineering graduate.