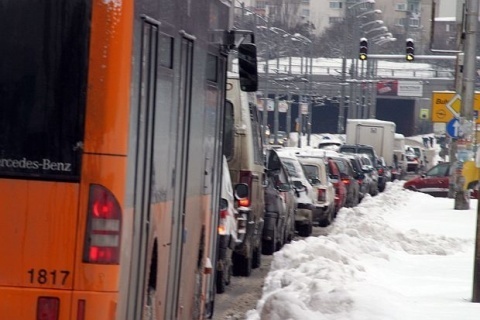 The public transportation in the Bulgarian capital Sofia is running without significant delays, despite the heavy snowfall. Photo by Sofia Photo Agency

A new heavy snowfall has gripped Bulgaria at the start of the week, accompanied by strong winds in western and northern Bulgaria.

The mercury is expected to go up briefly on Monday with the maximum temperatures from minus 4 degrees C in northwestern Bulgaria to plus 5 C in the southeastern regions. In Sofia, the maximum will be minus 5 C.

Code orange over snow and low temperatures is effective for all but 5 Bulgarian regions, the National Institute for Meteorology and Hydrology at the Bulgarian Academy of Sciences (BAS) has announced.

A more moderate code yellow has been issued for the regions of Blagoevgrad, Haskovo, Yambol, Burgas and Varna. Code yellow means potentially dangerous weather, where the forecast is not for unusual meteorological events, but requires people to exercise caution.

Roads across the country are reported as passable under winter weather conditions - treacherous with snowdrifts and ice at spots. The road between Sofia and the western city of Kyustendil is closed over an avalanche and vehicles are detoured.

Tractor trailers over 10 tons are banned in a number of mountain passes; tire chains are required in these areas as well.

The situation in southern and southeastern Bulgaria, which was the most affected by deadly floods, remains complicated. The municipalities of Harmanli, Svilengrad and Lyubimets are still under emergency situation and rescue and rebuilding effort there is ongoing.

Army servicemen are delivering drinking water to villages in the area and the dikes near the Maritsa River in the vicinity of Svilengrad on the Bulgarian-Turkish border are being reconstructed.

The water level at dams across the country is reported as normal and there are no overflowing ones. Those which are potentially dangerous for floods have their valves ready to be open to let water out and are being monitored round the clock.

In the capital Sofia, public transportation is running with delays and there are huge traffic jams at some key locations and main thoroughfares such as the boulevards "Alexander Malinov," Tsarigradsko Shosse," "Slivnitsa," "Bulgaria" and the intersection at the Sofia University.

The City Hall's services have cleaned several times already the main roads and those used by public transportation. Some streets will be closed for traffic in order to be cleaned.

Drivers are asked to exercise extreme caution; have their automobiles equipped for winter weather; observe distance and park only on designated spots in order to not impede the work of snowplows.

Sofia International Airport is open, but flights are experiencing some delays of up to 15-20 minutes for the cleaning of the runways.

About 90 homeless people have been taken to the City Hall shelters overnight.