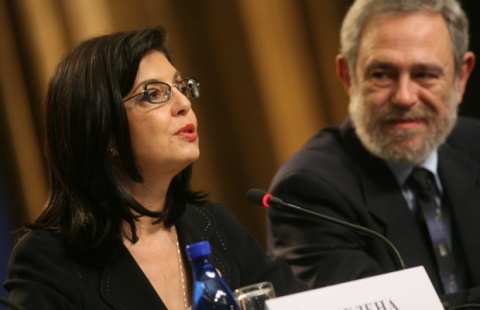 "Brussels told us what we all already know: Bulgaria's current rulers do not want a change in the status quo," said a statement by the civic movement, established and led by former Bulgarian European Commissioner Meglena Kuneva (pictured). Photo by Sofia

The European Commission has issued its most critical report on Bulgaria so far for its failure to reform its courts, reduce corruption, and fight organized crime, according to the country's former commissioner in Brussels.

"Brussels told us what we all already know: Bulgaria's current rulers do not want a change in the status quo," said a statement by the civic movement "Bulgaria for Citizens," established and led by former Bulgarian European Commissioner Meglena Kuneva.

It points out that the report stands in harsh contrast to what has been described as the "never-ending boasting that the ruling party and the government are so fond of".

"This time the ruling party will find it very difficult to put the blame for all faults to the justice system," the statement says.

According to Meglena Kuneva this is the first time that the European Commission recommends a radical reform in the Supreme Judicial Council and the Prosecutor's office without any political intervention.

"The report notes that public institutions (in particular the Ministry of Interior, which is required to monitor that laws are observed) systematically circumvented procedures for awarding public contracts," says the movement.

The report also for the first time questions the existence of "fair elections" in Bulgaria by pointing out that allegations of electoral fraud, following the Presidential and local election of last October are being investigated by the prosecution.

Bulgaria and Romania have made some progress against corruption and organized crime, the European Union's executive said Wednesday, as it offered the two countries only limited hope that they might be let into the Schengen borderless area in the summer.

The report says that "dissuasive sanctions for votebuying as well as full transparency in political party financing – in line with GRECO recommendations – remain essential for public trust the authorities' ability to fight organized crime and corruption."