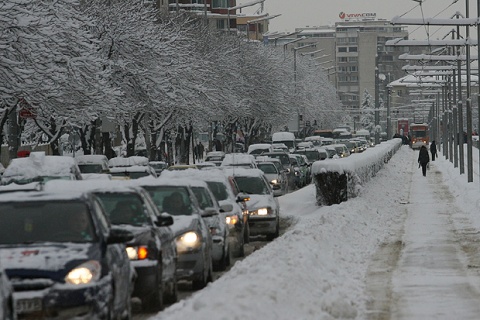 Snow is supposed to arrive in western and central Bulgaria Saturday night into Sunday. File photo

Nine Bulgarian regions remain under code yellow Saturday over fog and snow, the National Institute for Meteorology and Hydrology at the Bulgarian Academy of Sciences (BAS) has announced.

In the regions of Vidin, Montana, Vratsa and Pleven in northwestern Bulgaria the warning is over expected snowfall and ice; in Plovdiv and Pazardzhik in southern Bulgaria – over fog, in Blagoevgrad in southeastern Bulgaria and in Smolyan in the Rhodoppe Mountains – over heavy rain, while in the southern region of Kardzhali code yellow was declared for heavy mixed precipitation of snow and rain.

Snow is supposed to arrive in western and central Bulgaria Saturday night into Sunday. During the day Saturday, the maximum temperatures will climb to 2 to 7 degrees Celsius above 0, minus 2 to plus 1 in northwestern Bulgaria, and plus 4 in the capital Sofia.

Meanwhile, it was reported that the Danube River's freezing over is expanding once again Saturday, obstructing navigation even further.

The floating ice has reached 60% of the river's surface at the Bulgarian Danube cities of Ruse and Silistra.