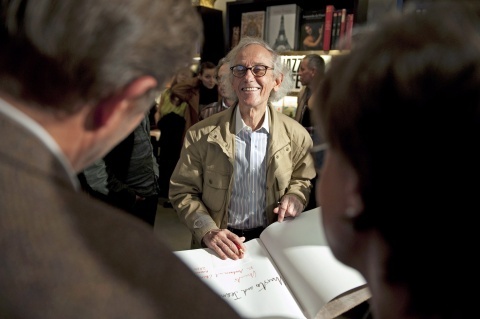 A lawsuit has been filed by group of environmentalists, outdoor enthusiasts and wildlife advocates demanding to block a project by Bulgarian-born artist to drape fabric canopies along a long stretch of the Arkansas River in Colorado.

According to the group, the US Bureau of Land Management in Denver has violated federal legislation and its own policies by approving Christo’s “Over the River” project.

Local business leaders and politicians have pointed out that the economy is still bad in the part of Colorado where “Over the River” is situated, stating that the project would put places like Ca?on City on the map and create long-term benefits.

However, opponents seeking to halt the project have argued in their lawsuit that allowing the drilling of some 9,000 bores to anchor 925 fabric panels would adversely impact wildlife, cause traffic tie-ups and disrupt recreational activities.

The project will cost USD 50 M and is expected to draw 400,000 visitors, but Rags Over the Arkansas River Inc.  fears that it will get in the way of natural beauty.

Similar past works of Christo and his late wife Jeanne-Claude include the wrapping of the Reichstag in Berlin and the Pont-Neuf bridge in Paris, the 24-mile-long artwork called Running Fence in Sonoma and Marin counties in California, and The Gates in New York City's Central Park.

Their projects have been opposed before – The Gates in the NYC Central Park was only permitted in 2005 by the administration of Mayor Michael Bloomberg, even though it was first proposed by the artists in 1979.