Mercury Climbs up amidst Forecast of New Snow in Bulgaria 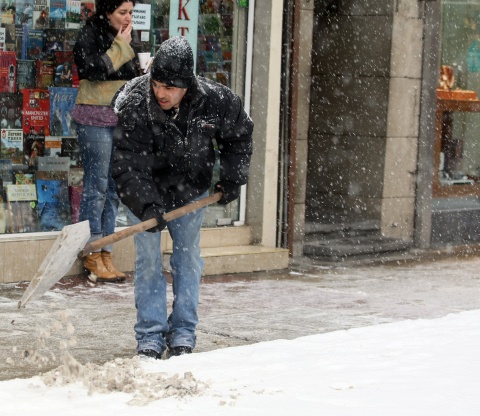 New heavy snow is in the forecast for 11 Bulgarian regions. Photo by BGNES

Eleven Bulgarian regions remain under code yellow over low temperatures and snow, the National Institute for Meteorology and Hydrology at the Bulgarian Academy of Sciences (BAS) has announced.

New heavy snow is in the forecast for the regions of Vidin, Montana, Sofia city and Sofia, Pernik, Vratsa, Pleven, Lovech, Gabrovo, Veliko Rarnovo, and Ruse. In Vidin and Montana, the snow will be accompanied by freezing cold.

1 037 schools across the country are closed for classes Friday either over the inclement weather of the flu epidemic.

The mercury will slowly climb up with maximum temperatures reaching minus 9 degrees Celsius in northwestern Bulgaria to minus 4 in the southweastern regions and on the Black Sea coast. In Sofia, the temperature will be up to minus 3.

The Bulgarian Embassy in Bucharest warns all Bulgarian citizens to postpone trips to Romania where code yellow might be effective until February 8. On Thursday, Romanian authorities closed the Danube Bridge, connecting the two countries over inclement weather.

Meanwhile, it was reported that the Danube River's freezing over is expanding once again Friday, obstructing navigation even further.

The floating ice has reached 50% of the river's surface at the Bulgarian Danube cities of Ruse and Silistra.