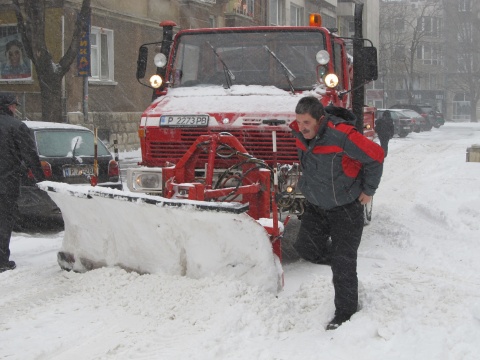 Workers trying to clear snow off streets in northern Bulgarian city of Ruse as snow pours on. Photo by BGNES

Heavy freight trucks have been banned from travelling in and through Bulgaria, as heavy snowfall that started overnight is continuing throughout the country Thursday.

The situation is critical in the Ruse and Razgrad regions of northeastern Bulgaria, where the vast majority of roads have been closed, due to snow drifts of 0.7-1.5 m.

Code Red for extremely dangerous weather is under consideration for both Ruse and Razgrad regions.

The Danube Bridge to Romania at Ruse is also closed due to heavy snowfall in southern Romania.

The municipalities of Godech and Svoge in western Bulgaria have declared emergency situations, with communications with smaller settlements in the areas being cut off.

At least 30,000 users of electric power utility CEZ in western Bulgaria have been left with no electricity, down from 53,000 Thursdsay morning.

Heavy snowfall with power blackouts and minor road problems are also reported in the Rhodope Mountains area of southern Bulgaria.