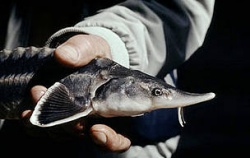 Five of the six native sturgeon species in the Danube river are critically endangered because of poaching, Photo by WWF

"It is of utmost importance that Bulgaria has finally joined Romania in this very important measure",  said Vesselina Kavrakova, Programme Manager of the WWF Danube-Carpathian Programme in Bulgaria, as cited by WWF.

"The Romanian moratorium came into force in April 2006, but considering that the Danube serves as a national border between Bulgaria and Romania, a one-sided ban was not effective," she pointed out.

The two Balkan countries hold the only viable populations of wild sturgeons in the EU, but five of the six native sturgeon species in the Danube river are critically endangered because of poaching,

"Overfishing because of persistent illegal trade in their caviar involving Bulgaria and Romania, is the biggest cause for concern, but habitat alteration, including hydropower, and pollution are also contributing causes", Kavrakova commented.

According to the World Sturgeon Conservation Society, the Danube is the only large river system in Europe where protection of existing but dwindling sturgeon stocks is still possible.

"What we need now, is to see various activities conducted in support of sturgeon populations, for example restocking and monitoring of the status of sturgeons. We need to see an effective information campaign among fishing communities and a true enforcement of the ban", Kavrakova said.

"We want to see that both Romania and Bulgaria raise awareness among enforcement agencies of the illegal caviar trade and strengthen their capacity to control and monitor the trade", she added.