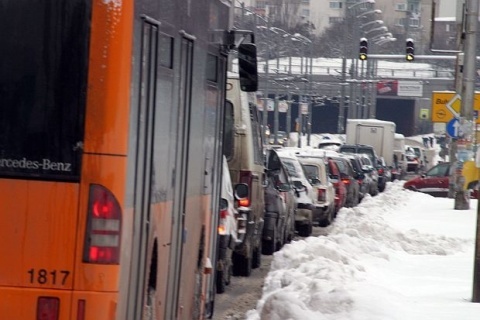 The public transportation in the Bulgarian capital Sofia is running without significant delays, despite the heavy snowfall. Photo by Sofia Photo Agency

The Sofia City Hall has called emergency headquarters to coordinate the cleaning of snow-covered roads.

It has been snowing in the capital since the wee hours Wednesday and there is a reported a 35-cm snow cover.

The Mayor of Sofia, Yordanka Fandakova, informs that all available snow plows and other snow removal equipment – about 200 machines, are on the streets and had cleaned non-stop overnight into the day Thursday.

The City Hall's services have cleaned several times already the main roads and those used by public transportation, which is running without significant delays. Fandakova says those thoroughfares are priority while the cleaning of side streets will start in the evening.

Public transportation stops and underpasses are also being cleaned round-the-clock, according to the City Hall.