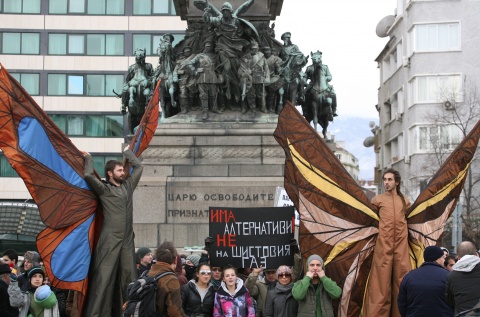 "There are alterntaives! No to shale gas!" the poster reads. On Saturday, the latest in the series of environmental protests took place in several cities across Bulgaria. BGNES

Bulgaria's Parliament did not support the bill proposed by the left-wing Bulgarian Socialist Party (BSP) that envisioned a full ban on the exploration and extraction in the country.

123 out of the total of 240 MPs in Bulgaria's single-chamber Parliament voted against the bill, while 43 were in favor and 66 abstained from voting.

Prior to Wednesday's vote, Valentin Nikolov, a key lawmaker from the ruling centrist-right GERB pointed out that a bill like that would affect the work of three Ministries and should be therefore prepared by experts from these Ministries.

BSP MP Petar Kurumbashev reminded that high government officials have been arrested in Poland on suspicions of corruption in shale gas deals.

The Bulgarian Socialist Party, as well as the far-right Ataka, believes that banning shale gas exploration and extraction in Bulgaria will be more efficient than passing a moratorium on these activities.

The moratorium, which is proposed by GERB, is to be voted later on Wednesday.

Bulgaria's Prime Minister, Boyko Borisov, stated during a meeting of the Council of Ministers that the government would not grant US company Chevron a permit to study shale gas deposits with the use of hydrofracking and would allow it only when there is a worldwide guaranteed technology for such extraction.

The ruling party has prepared a draft proposal banning the use of hydrofracking technology in the extraction and exploration of gas and oil in Bulgaria.

All exploration and extraction activities where the hydrofracking technology is planned must be immediately stopped, effective the date of the publishing of the decision. Sanctions could include a fine of BN 100 000 and confiscation of equipment.