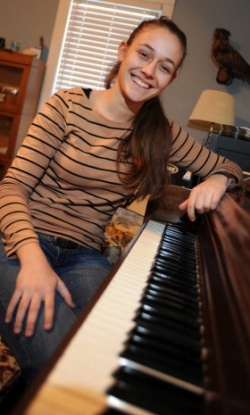 While a veteran of venues across Europe, Bulgarian pianist Lili Bogdanova recently embarked on her first journey to the United States, where she is being featured in several Augusta-area concerts.

The Columbia County Orchestra Association selected the 17-year-old from Sofia, Bulgaria, to participate in a residency program. Arriving last week, Bogdanova will spend three weeks in Evans as she performs in recitals at schools, churches and private functions.

Orchestra Association Music Director Rob Nordan said he first learned about Bogdanova's talent when he saw her on a YouTube video last summer.

"I was absolutely blown away by the fact that when she did that recording, she was 15," he said.

Nordan contacted Bogdanova and her parents to see if they'd be interested in sending her to the U.S. for an international tour.

"Since she could walk, her favorite object has been the piano at home," Tsvety Bogdanova said. "We had never imagined that she'd have this opportunity so early in her life and career."

Lili, whose mother teaches English in Bulgaria, didn't have to worry much about a language barrier.

She started playing the piano when she was just 5 years old and joined the National School of Music in Sofia two years later.

Lili said she spends at least three hours each day sitting at the piano and rehearsing.

"I've always done it because I wanted to."

Starting at age 9, Bogdanova has competed in and won several piano competitions throughout Europe. She has performed in England, Cyprus, Romania and Switzerland.

"It's really nice," she said of traveling. "You get to see many places and meet many new people."

Since coming to Evans, Bogdanova hasn't had much of a chance to explore her new surroundings.

Aside from the weather in Sofia, where heavy snow with lows in the teens was forecast shortly after she left, not much is different, she said.

Sofia has a population of about 1.5 million.

"I actually expected that it would be more different, but it's not really," she said. "Everything is bigger, but it's really nice here."

The family she's staying with has promised to take her to Atlanta for a few days, giving her a chance to sightsee in Georgia's largest city.

"I just wanted to see what it's like here," Bogdanova said. "Everybody's been saying it's so different here, and it's a whole different world."

*The title has been changed by the Editorial Staff of Novinite.com