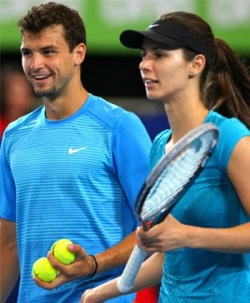 Pironkova said she enjoyed playing the mixed doubles alongside Dimitrov on Monday even if she didn't serve an ace at Tomas Berdych.

"It feels very good to make an ace which I didn't but that was my point. We had a bet if I made an ace then he (Dimitrov) buys me dinner," Pironkova said.

"We're going to relax and try to concentrate for the next match because it's very important and maybe I'll go swimming. We'll see."

"It was a great match today, especially playing for the first time together and it was a pleasure to play with her. And of course we had fun on the court which was the point and I wish good luck to the Czech guys," Dimitrov said.

"It's the first match of the year so of course you're a bit rusty but you try to do your best and today Tomas was on top of his game and obviously he's a top 10 player. I think I covered a bit of the expectation of me and hopefully we're going to have a nice day off and be ready for the next one."

The victory however came after Wimbledon champion Petra Kvitova and Tomas Berdych won singles matches to give Czech Republic a 2-1 win over Bulgaria.

Even though Kvitova dominated the match, Tsvetana Pironkova forced the Wimbledon champion fight some turbulence before putting to good use her daunting left-hand delivery that was the mainstay in her famous triumph last July.

The world No. 46's week continues on Wednesday against Denmark and world No. 1 Caroline Wozniacki and then on Friday against American Bethanie Mattek-Sands.

The match lasted for more than two hours and the Bulagrian player showed once again he does not give up easily.

"He was playing really well," Berdych said of Dimitrov.

"He's going to be really dangerous this year.

"But I'm pretty happy to start the year with a win. It gives you more confidence to have the first win of the year."