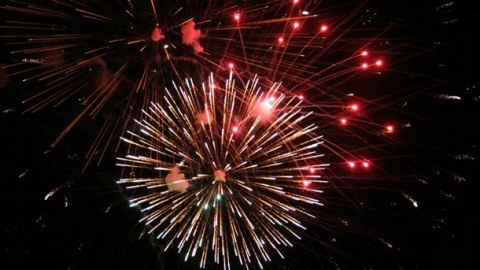 Sydney celebrated the arrival of 2012 with marvellous fireworks above the opera house. EPA/BGNES

The Pacific islands, New Zealand and Australia have greeted 2012 with much excitement and splendid fireworks.

The New Year's Eve parties started a whole day early on the South Pacific island nation of Samoa, after a hop across the international date line transported the country 24 hours into the future — making it the first in the world to ring in the new year, the Time magazine reported.

Samoans began celebrating under a rainbow of fireworks at the stroke of midnight on Thursday, Dec. 29 — when the country skipped over Friday and moved straight into 12:01 a.m. on Dec. 31.

Samoa and neighboring Tokelau lie near the date line that zigzags vertically through the Pacific Ocean, and both sets of islands decided to realign themselves this year from the Americas side of the line to the Asia side, to be more in tune with key trading partners.

The time-jump revelry in Samoa continued throughout Saturday as the hours ticked down to 2012. Pools and beaches across the capital Apia were packed with Samoans and tourists celebrating the country's sudden position as the first in the world to ring in the new year, rather than the last.