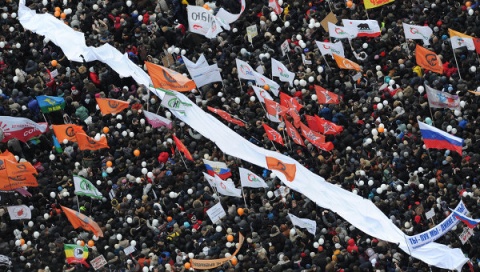 Some 120 000 protesters are said to have rallied against election fraund in the Russian capital Moscow. Photo from RIA Novosti

Tens of thousands of demonstrators rallied in cities across Russia on Saturday to protest alleged vote fraud in recent parliamentary elections and to call for the removal of the officials responsible.

There was a strong police presence, with security personnel using metal detectors to vet demonstration participants before allowing them into the sanctioned protest site.

Police spokesmen gave the size of the Moscow crowd at approximately 29,000 participants and 500 journalists, the Interfax news agency reported.

The provincial protests numbered in the hundreds, despite temperatures dipping to 30-degrees-below-zero Centigrade at some locations. Police presence was moderate and the protests were loud but mostly peaceful.

A reported 17 anti-government protesters were arrested in the city of Nizhny Novgorod, where their demonstration had not been sanctioned, Interfax reported.

Protesters in Moscow shouted anti-government slogans and called for the ouster of Vladimir Churov, the Central Election Commission chief, for his alleged ineffective control of December 4 parliamentary elections considered by the opposition to have been flawed by vote-tampering.

The Moscow demonstration was peaceful, with almost no conflict between the demonstrators and police.

"The people who have come here, do not have the intention to grab power. We are peaceful and we will not do that," said Aleksei Navalny, an opposition leader and political blogger who was jailed for 15 days in December for participating in unsanctioned demonstrations.

"We will take back what belongs to us, we will make our votes ours," he promised.

Navalny has been a high-profile Kremlin gadfly in recent weeks, calling members of the government "thieves and swindlers."

Former finance minister Aleksei Kudrin, who broke with President Dmitry Medvedev over high state spending on armaments, was present at the rally along with other leading government opponents.

"In this job there should be a person that people can trust. Churov must go," Kudrin said in a speech.

In recent comments, Churov called the election - which returned the ruling United Russia party to power - free and fair. He said Russia had one of most reliable election systems in the world, a claim that has infuriated government opponents.

A possible split within the government on Churov's future was evident on Saturday, with Mikhail Fedotov, a human rights advisor to Medvedev, publishing a statement suggesting the president 'immediately look into reports of violations of election law.'

Medvedev and his ally, Prime Minister Vladimir Putin, have repeatedly said they believe the election was legitimate and the victory of their party was fairly gained.

Russia has been convulsed by the biggest anti-government demonstrations seen in two decades in the wake of the election.

Putin is running for president in a March 4 vote as United Russia's candidate. If he wins, he would serve for an unprecedented third term in office - something his critics say would further strengthen the party's control of Russia and repress dissent.

Putin has said he supports democracy and that United Russia's longstanding dominance of the country's politics reflects widespread public support for its policies.