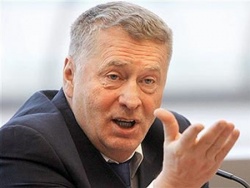 Controversial Russian nationalist Vladimir Zhirinovsky will be endorsed as the presidential candidate of his Liberal Democrats party, Russian media have reported.

Zhirinovsky's candidacy is expected to be officially announced later on Tuesday, as the party gathers for its 24th congress. This would be his record fifth presidential campaign, his best result being in 2008 when he gathered 9.35% and finished third.

On Monday, Russian billionaire Mikhail Prokhorov announced that he would also run for president against Prime Minister Vladimir Putin next March.

Prokhorov is Russia's third richest man with a fortune estimated at USD 22.7 B. He is the chairman of Polyus Gold, Russia's largest gold producer, President of Onexim Group, and owner of the NBA team New Jersey Nets.

Saturday saw massive protests in the capital Moscow and other major cities in the country against what people have widely perceived as rigged general elections.

The protesters called for the dismissal and prosecution of election officials, unregistered political parties to be allowed to participate in the race, to cancel the results of the earlier vote and to order new elections.