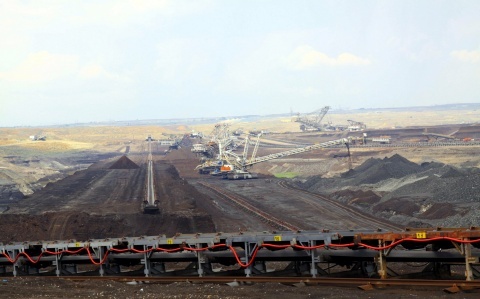 Bulgaria's Maritsa East Mines has been drained of an as as yet unspecified sum of money via companies providing crew transportation services. Photo by BGNES

Two people have been arrested on suspicions of participating in a fraud scheme for draining money from the state-owned company Maritsa East Mines through artificially inflated prices for employee transportation services.

According to a Friday report from the Stara Zagora unit of the Interior Ministry, the arrested are the directors of two of the three companies providing employee transportation services for the mining complex.

A third person, the director of another transportation firm, has gone into hiding and is sought on a nationwide warrant.

The companies, which were subjected to police raids on Friday, had won transportation tenders but, rather than rendering the services, preferred to outsource them to smaller companies, keeping substantial shares of the payment to themselves.

"They formed legal persons by joining small carrier companies, and, technically speaking, the new legal entity signed a contract with the mining complex for a grossly exaggerated per kilometer rate," said Alexi Alexiev , head of the Stara Zagora District Directorate of the Ministry of Interior, as cited by the Focus news agency.

According to Alexiev, the small firms retained the payment which corresponded to the actual price of the service, while the remainder was pocketed by the fraudsters.

He explained that the "subcontractors" had usually been blackmailed into participating in the scheme for fear of being chased out.

The damages Maritsa East Mines suffered are yet to be established, but the calculations will most likely yield a hefty figure because crew transportation services at the company have been carried out on a daily basis for years on end.

The authorities have been working on the case for over a year.

Charges have been brought up against the two men and they will remain under arrest for 72 hours.

According to Alexiev, a number of public officials are also pending charges and will most probably also be placed under measures of remand, Alexiev said.

The case is being monitored by the Stara Zagora Prosecutor's Office.