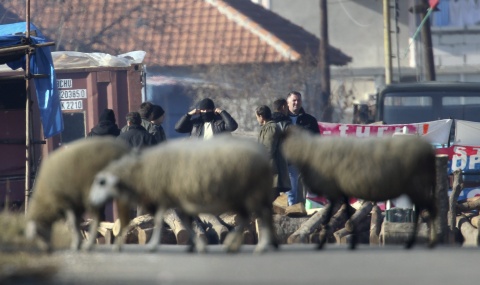 Kosovo Serbs gather near a road barricade in the village of Zupce, Kosovo, 29 November 2011. EPA/BGNES

Serbia and Kosovo have resumed European Union-brokered talks in Brussels, with Belgrade under pressure from the bloc to strike agreements with its former province in order to make progress towards EU membership.

Wednesday's talks were expected to focus on Kosovo's participation in international forums - which Serbia has so far blocked - and on the violent protests by ethnic Serbs in northern Kosovo against the handover of two border points to Kosovo officers, German press agency DPA reported.

None the chief negotiators, Serbia's Borislav Stefanovic and Kosovo's Edita Tahiri, were hopeful ahead of the meeting, the eighth since March.

"We'll try to reach a deal on the representation of Pristina in regional conferences and on administrative crossings," Stefanovic said. However, he warned that any deal was a long way off because of opposing views on Kosovo's sovereignty.

"It will be hard to achieve agreements," Tahiri said, stressing that Kosovo would not abandon its plan to assume control over its borders in a volatile Serbian enclave in the north.

Underscoring the continuing tensions, 30 NATO soldiers were injured Monday in clashes with ethnic Serbs as they tried to dismantle roadblocks obstructing traffic to the contested border points.

In a bid to improve Serbia's chances to become a membership candidate on December 9, Tadic called on his compatriots in Kosovo to abandon the roadblocks and lower tensions. The Serbs, however, have so far refused to comply.

The message was delivered ahead of a decision due to be taken at an EU summit on December 9 on whether to grant Serbia the status of official candidate.