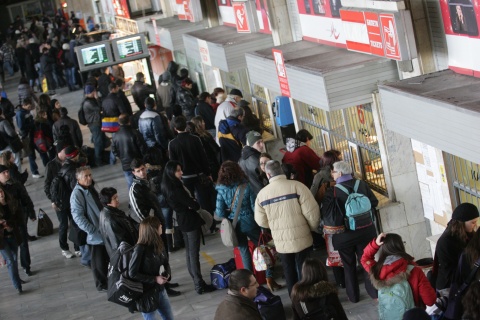 Thousands of people were stranded at the Central Railway Station in Sofia on Thursday between 8 am and 4 pm. Photo by BGNES

Nobody seems to know how many trains really were affected by the railway workers' strike in Bulgaria on Thursday, with the Transport Ministry, the Bulgarian State Railways BDZ, and the syndicates all reporting different figures.

The Bulgarian railway workers are set to strike every day from 8 am till 4 pm until they resolve their differences with the government, starting on Thursday.

The Transport Ministry, however, announced vastly different data – 85 out of 210 trains were stranded by the strikers, its data shows.

"The first day of the strike went even better than expected, especially against the backdrop of the severe pressure on the BDZ workers. We expect a greater number of workers to join the strike tomorrow," Bunev explained as cited by money.bg.

"The management of the BDZ Holding EAD is stating again that it will not yield any ground from its position to carry out the necessary reforms," the company said in a statement Thursday night.