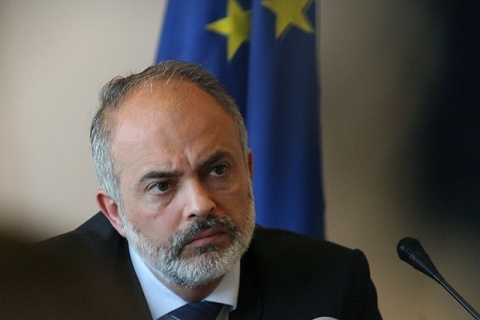 Bulgaria's Prime Minister, Boyko Borisov, is not satisfied at all with the work of Social Policy and Labor Minister, Totyu Mladenov.

In a Sunday evening interview for the TV channel bTV, in the talk show "Let Them Talk," Borisov stated he had shown Mladenov the "yellow card" already. Speaking about Mladenov, he said the job of the Minister is not to be the good guy, but to, sometimes, tell people the bad news, explain to them and to the syndicates the need to undertake one measure or another.

The PM stressed that Mladenov acts more like a labor union leader, not a minister, and warned he would be immediately replaced the next time Borisov is forced to explain himself to people (instead of the Minister) some changes, for example why retirement age must go up as early as 2012.

When asked when he plans to replace Mladenov, the country's leader replied that "things are developing fast." He asked Mladenov from the TV screen to go to the labor unions and appease them about retirement age.

"If we are a true right-wing cabinet and true Europeans, we must implement these measures. These are the possibilities of the State. Everything else would be a total lie. We are managing a situation close to the one right after World War II," Borisov pointed out.

"Our retirement system is flawed since the very start – the money collected is never enough and the State must shell secretly some BGN 700 M a year from the health care sectors, education and sports, and transfer them to the National Security Institute (NOI) so that we can pay pensions," he stated in connection with the retirement reform, adding if this cabinet does not carry it out, the next one will, and if not – the International Monetary Fund (IMF) will impose it.

Regarding the planned effective strike over looming layoffs at the railway company BDZ, the PM commented that the syndicates had to go on strike years ago, when the situation began deteriorating, saying "they saw that the train was heading into the abyss, but failed to react.".

Hours before the interview, the Podkrepa (Support) Labor Confederation and the Confederation of Independent Bulgarian Syndicates (KNSB) announced Sunday that they are quitting the Three-Way Council with the business and the cabinet.

The joint decision, first announced by Podkrepa, stems from outrage against sudden plans of the cabinet to increase retirement age by one year for both men and women as early as 2012, and against plans to eliminate years of service in determining pay for State servants.

Meanwhile, Bulgaria's railway unions remain unwavering in their vows to stage a mass strike after the recent announcement of the management of the heavily indebted state-owned railway company BDZ Holding that it intended to lay off 2 000 workers, and reduce the number of trains in operation by 150 by January 2012, all while ticket prices are going up between 9% and 15%.