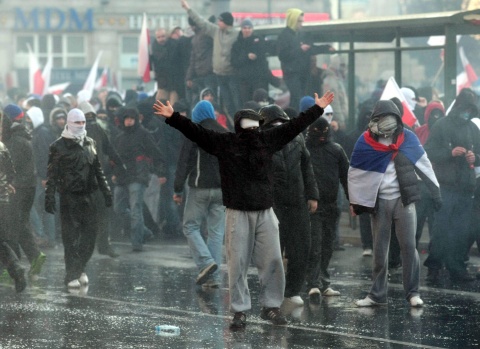 Participants of the `March of Independence` clash with the police at the Plac Konstytucji (Constitution Square) in Warsaw, Poland, 11 November 2011. EPA/BGNES

Eighteen people were injured, including eight policemen, and some 100 were arrested as nationalist and leftist protesters clashed with police Friday during a march commemorating the Polish Independence Day in Warsaw.

Police arrested some 100 people, including members of leftist groups, after they attacked officers during the marches. The violence reportedly broke out when police tried to stop skirmishes between nationalist and leftist groups.

The march was organized by far-right organizations, including the All Polish Youth group. Around 10 000 people were taking part, organizers said.

Various left-wing organizations had said they would hold rallies and block the nationalists' march, calling the groups "fascists."

Meanwhile, President Bronislaw Komorowski took part in a ceremony at the Tomb of the Unknown Soldier in Warsaw. He appealed for Poles to celebrate the day in unity.

"Let's not dictate to others how they should love Poland," Komorowski said.

Poland regained independence on November 11, 1918 after more than a century of partitions by Austria, Russia and Prussia.