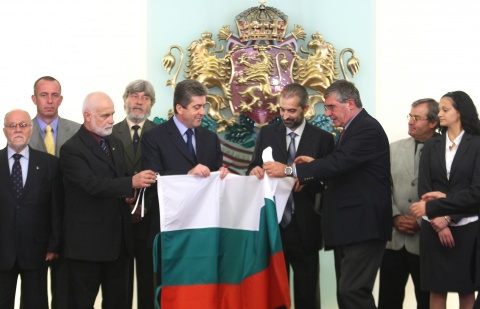 Outgoing President Georgi Parvanov hands the Bulgarian flag to the 20th Antarctic expedition amid appologies for the meager finnacial support from the state. Photo by BGNES

The 20th Bulgarian expedition to the Antarctic will set out early November amid serious financial difficulties.

Despite 20 years of sending scientists on exploration missions on the frozen continent, Bulgaria is still failing to provide money to pay for the transportation of the researchers, local news agency BGNES reports.

The expedition receives financial support from the business sector, while transport assistance is provided by Brazil.

The Bulgarian Antarctic base has a capacity to house 20-25 people.

In its capacity of a full Antarctic Treaty member Bulgaria determines the future of the continent together with 27 other countries.

Despite that, Bulgarian researchers depend on foreign ships and aircraft for transportation.

In 2011, the 25-strong Bulgarian team of scientists, headed by Professor Hristo Pimpirev, will participate in several international projects and an extensive research program.

Bulgarian researchers will also work on an entirely Bulgarian project concerning the impact of climate change on sea mammals and plants on the frozen continent.

Professor Pimpirev, head of the Bulgarian team of researchers and Director of the Antarctic Studies unit at the Bulgarian Academy of Science (BAS), has said that the construction of a new Christian Orthodox chapel in place of the old one, the St. Ivan Rilski Chapel, will be launched during the expedition.

Four wind turbines will be built with funding from private sponsors, while other sponsors will provide accumulators for storing energy.

The accumulators have been designed with the assistance BAS.

The equipment is already on its way to the Antarctic.