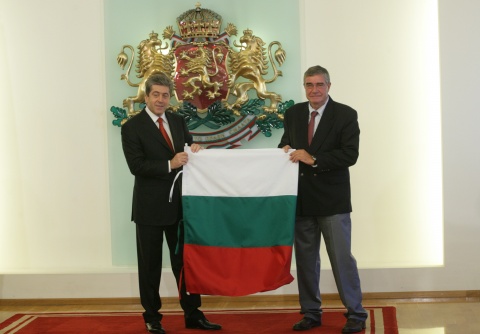 Addressing the scientists, Parvanov emphasized that the state was "indebted" to the expedition as the financial support it could provide had been reduced to a minimum, despite its strategic importance.

The President explained that the team of scientists had been reduced by a half as a result of slashed funding.

Under an already established tradition, the President met with the group of researchers prior to  their departure and handed the Bulgarian flag to the leader, Professor Hristo Pimpirev, in a wish for good luck in their work.

The scientists will depart in smaller teams, with the first 9-strong unit set to leave on November 02 and the last scheduled to return to Bulgaria in mid-March.

The scientists will be studying the impact of global warming on sea mammals and Antarctic lichens.

The researchers will also participate in a collaborative project with international colleagues envisaging the exploration of frozen Antarctic soils.

Another venue of research will involve monitoring the radiation environment on the continent.

The already existing Bulgarian chapel is only the second Eastern Orthodox temple on the Antarctic continent, but BAS scientists have the intention to place a new, bigger one at a better location.