Bulgarian Academy of Sciences to Sue Govt over Budget Cut 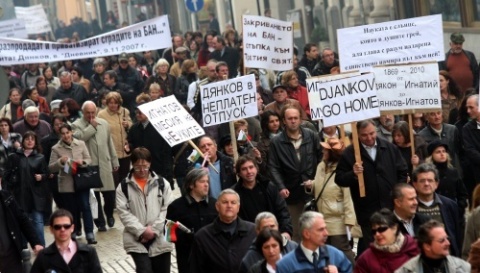 "BAS Closure - A Step Towards the Third World", reads one of the banners of the protesting scientists who marched in Sofia two years ago. Photo by BGNES

The Bulgarian Academy of Sciences has issued a statement saying they will sue Bulgaria in the Strasbourg Court of Human Rights if the government does not revise the budget cut in store for the Academy in budget 2012.

Monday the cabinet, led by Bulgarian PM Boyko Borisov, announced that it will give some BGN 5 M less for BAS in 2012, which is with 9% less than for the current year.

On the other hand, on the whole the budget for research and education will be up by some BGN 50 M, taken from the close to BGN 1 B budget of the Ministry of Interior.

What is worse in the case of the Academy is that in 2010 and 2011 its budget was already drastically cut by some 40%.

This led in 2010 to some of the most large-scale protests against cabinet policies, in which thousands of BAS researchers together with university professors and students marched out.

Bulgarian Minister of Finance Simeon Djankov has not hidden his animosity for BAS, calling researchers there "feudal old men" and claiming the institution is ineffective and unreformed.

On its part, the Academy has carried an extensive reform, and has been forced to refrain from even paying the salaries of its researchers in full.

Thursday black flags were pulled down on the facade of the Academy main building in downtown Sofia right next to the House of Parliament.

The Academy has sent out a letter to PM Boyko Borisov saying the BGN 54 M subsidy previewed in budget 2012 is insufficient, and requesting BGN 95-98 M.

The letter says that BAS is ready to come out in protest should their demands not be met and will not hesitate to address the Strasbourg court as a last resort.

Thursday BAS Chair Nikola Sabotinov also said that if the Academy's budget is not brought back to normal, it will be forced to discontinue key activities such as national weather forecasting and seismology survey.