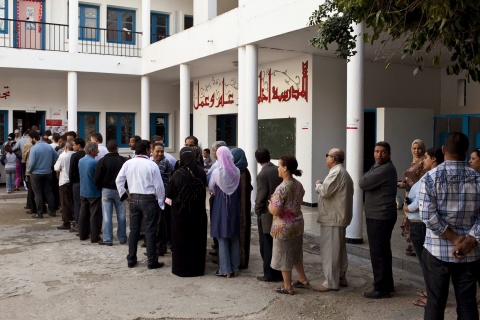 International observers declared democracy the true winner of Tunisia`s historic elections on Sunday, saying that while the vote had its "imperfections" but that it was an important step for the north African nation, and an example for other Arab countrie

Tunisia's first ever free and democratic elections are expected to bring to the fore a formerly banned Islamist party, observers noted Monday as the electoral authorities in the country counted the votes cast the previous day.

The elections come nine months after in January 2011 a popular uprising that ended decades of authoritarian rule by President Zine El Abidine Ben Ali, and served to inspire similar developments in other Arab countries that led to the ousting from power of long-serving dictators – Hosni Mubarak in Egypt and Muammar Gaddafi in Libya.

The protests also spread to countries in the Middle East such as Syria, Yemen and Bahrain.

4.4 million registered voters in Tunisia are set to pick a 217-member constituent assembly. That multi-party body will, in addition to drafting a new constitution, also be charged with appointing an interim president and a caretaker government for the duration of the drafting process, Al Jazeera reports.

More than 11,000 candidates were running in the election, representing 80 political parties. Several thousand candidates are running as independents.

More than 14,000 local and international observers watched polling stations. European observers on Monday pronounced the election one of the freest they had ever seen and urged all the parties to accept the results.

Voter turnout in Tunisia reached 90% of the country's 4.4 million registered voters, out of a 7.5 million strong electorate.

"There is no way of arguing the legitimacy of the outcome, absolutely not, even if there is disappointment," said Swiss parliamentarian Andreas Gross, the head of the observer delegation from the Council of Europe.

Results from polling stations around the country Monday reveal a lead for the moderate Islamist party Ennahda, whose victory in Tunisia described by Western media as a "moderately security Muslim and Arab country" could have huge repercussions about the direction of the "Arab Spring" revolutions.

Ennahda's victory in the Tunisian elections has been expected and the major question is whether it will manage to win a majority.

The moderately Islamist party Ennahda believes that Islam should be the reference point for the country's system and laws but maintains it will respect women's rights and is committed to democracy and working with other parties.

The Congress for the Republic party of longtime human rights activist Moncef Marzouki, according to party and electoral officials, is likely to come in second. Marzouki is known less for his political beliefs than for his high-profile criticism of the old regime's repression.

The poor performance of the Progressive Democratic Party, the strongest legal opposition group under the old regime, a center-left party that has billed itself as the main opponent of Ennahda and a defender of secular values, is widely regarded as a surprise.

The mother of Mohamed Bouazizi, the young vegetable seller whose self-immolation last December set of the Tunisian revolt, said that the elections were a victory for dignity and freedom.

"Now I am happy that my son's death has given the chance to get beyond fear and injustice," Manoubia Bouazizi said, as cited by Al Jazeera. "I'm an optimist, I wish success for my country."