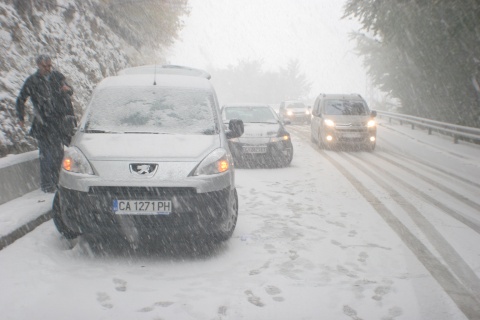 Snowed in cars move slowly along the Shipka Pass in the Stara Planina mountains, central Bulgaria on Sunday. Photo by BGNES

Sunday the first snow fell in the Bulgarian west lowlands, with temperatures not reaching above 5 degrees Centigrade.

Monday intensive precipitation of rain and snow, as well as exceptionally strong winds are expected for the Bulgarian east end, along the Black Sea coast.

A more moderate code yellow has been issued for Haskovo, Yambol, Sliven, Shumen and Silistra regions, also in the eastern part of the country, announced the National Institute for Meteorology and Hydrology at the Bulgarian Academy of Sciences.

Tuesday a warming up of the weather is expected, with sun setting in and temperatures going back to the normal for the fall, with highs reaching around 15 C.

Over the course of Sunday, a number of roads across the country experienced obstructions due to the unexpected snowfall.