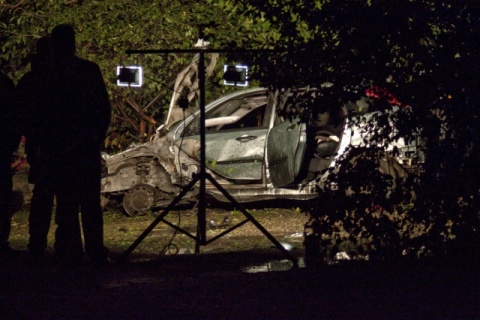 The blast exploded about 10 pm in front of the residential building where Sasho Dikov lives. Photos by Channel 3

Sasho Dikov, a popular Bulgarian journalist and a harsh critic of the government, whose car was blown up late on Thursday, has said the blast has two goals – to intimidate him and discredit those in power.

"If there are people who are happy after last night's explosion, these are the opponents of the current government, who want to discredit it," Dikov, program director of private television Kanal 3, told the morning broadcast of bTV channel on Friday.

He stressed once again that he has not received threats from anyone, but vowed to continue to talk about what he called "the obvious things". "I will keep on saying that [Interior Minister] Tsvetanov is a misunderstanding, that the fight against the mafia Octopus is a farce and that no one wants to investigate the match-fixing frauds in Bulgaria's football."

Dikov recalled that a few days ago he called on Bulgarians to start making serious changes in the country and vote in the upcoming local and presidential elections.

"I wanted for the first time to urge the Bulgarians to go out and vote. People, let’s vote! You can not leave power in the hands of mobsters! These elections are the most important in 20 years,” said Dikov.

According to him drawing parallels with the explosion in front of the office of Galeria weekly at the beginning of the year is inevitable.

"I do not want to make speculations. Only 8-9 hours have passed after my car since blasted, but the newspaper was targeted 8-9 months ago and still there is no result. The culprits have not been discovered, just like in so many other crimes. Bulgaria’s crime combat is a farce, "concluded the journalist.

The blast exploded about 10 pm in front of the residential building where Dikov lives and coincided with the visit of European Commission President Jose Manuel Barroso to Bulgaria's capital Sofia.

The improvised explosive device was planted under the front left tire of the journalist's car.