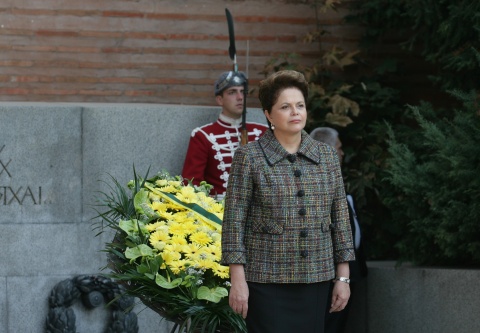 Brazilian President Dilma Rousseff laid a wreath at the Monument to the Unknown Soldier. Photo by BGNES

Brazilian President Dilma Rousseff, who is in Sofia as part of her European tour, was officially welcomed Wednesday morning with a red carpet ceremony on Alexander Nevksy square.

Amid tight security measures, more than one hundred Bulgarian and thirty Brazilian journalists, as well as many citizens gathered on the square in downtown Sofia to witness the start of the high-level visit.

The national anthems of Bulgaria and Brazil and a 21-gun salute were performed in honour of President Rousseff. She reviewed the guard of honour and laid a wreath at the Monument to the Unknown Soldier.

After the ceremony Rousseff headed for talks with the Bulgarian President Georgi Parvanov and Prime Minister Boyko Borisov, which will focus on ways to boost the relations between Bulgaria and Brazil, which are still undeveloped, especially when it comes to investment and trade.

On October 6, on the second day of her visit, Dilma Rousseff will visit Veliko Tarnovo and Gabrovo, the birth place of her father.

Rousseff landed at Sofia International Airport at about 11 pm Tuesday, where she was welcomed by Gen. Nikola Kolev, chief of staff of Bulgarian President Georgi Parvanov.

Dilma Rousseff, the daughter of Bulgarian immigrant Petar Rusev (Pedro Rousseff), has been eagerly expected in Bulgaria, all the more so because she has made clear her good feelings towards the home country of her father.