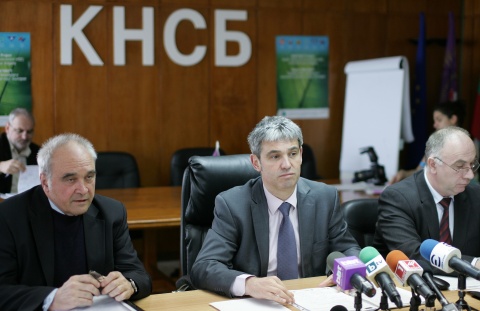 Bulgaria's syndicates have given the Borisov Cabinet one last chance to avoid a mass railway strike in October, which they announced earlier this month over trouble with Bulgarian State Railways BDZ.

The railway unions are set to meet with Prime Minister Boyko Borisov and Transport Minister Ivaylo Moskovski on Monday in order to seek out common ground to defuse the situation in the railway sector, announced Plamen Dimitrov, President of KNSB (Confederation of Independent Bulgarian Syndicates).

"We expect to hear at least three things at the upcoming meeting – how the financial memorandum signed on March 10 about the Bulgarian railway transport will be implemented; whether the amount of investments for railways over the next 5 years will be confirmed; and what the fate of the application for a loan from the World Bank will be," Dimitrov told reporters in Sofia Thursday.

The syndicates are firmly opposed to the government's intention to privatize BDZ Freight Services, the freight section of the troubled state-owned operator, which is usually a lot more solvent than the passenger services department.

KNSB believes that the Cabinet wants to sell BDZ Freight Services in order to pay off the BGN 480 M of debt that the state railway operator accrued in the past 15 years.

"We expect to learn how the railways will be restructured and what that will mean for its staff," the unionist explained.

He did say that the syndicates could agree to a compromise with the government based on the Cabinet's loan memorandum signed with the World Bank in December 2010. He stressed, however, that there could be no layoffs of railway workers without the signing of a new collective labor contract.

Bulgaria's railway syndicates announced two weeks ago they plan a strike in early October 2011 over a number of issues, including the news that a badly needed World Bank loan for state railway company BDZ has fallen through.

"We have no dialogue whatsoever with the management of BDZ and the Transport Ministry," Petar Bunev, head of the railway syndicate a the Confederation of Independent Bulgarian Syndicates (KNSB) told Darik Radio.

The major grievances of the railway unionists and laborers include the failed negotiations with the government for the signing of a new collective labor contract, the refusal of the World Bank to grant a massive loan for BDZ, and what is said to be measures on part of the government to implement massive layoffs from the railways in the near future.

Unionists say the entire railway system in Bulgaria is "in panic" as some 2000 people are to be laid off from BDZ Passenger Services and BDZ Freight Services.

The railway unions' strike announcement came a day after BDZ CEO Yordan Nedev announced that the World Bank has refused for the time being to a grant a life-and-death restructuring loan for the Bulgarian State Railways BDZ.

Nedev explained that the ailing Bulgarian railways need to demonstrate much better management in order to hope they can get the long-discussed loan.

According to Nedev, the end of 2011 the state company can make about BGN 10-13 M by ridding itself of outdated assets such as railway cars, spare parts, etc.