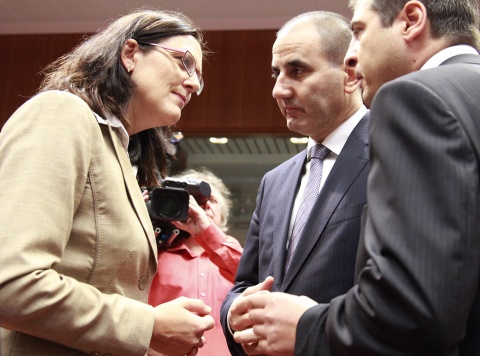 The Netherlands and Finland have expectedly vetoed the accession of Bulgaria and Romania to the visa-free Schengen Area at the meeting of the EU Interior Ministers in Brussels.

The Netherlands formally decided to veto Bulgaria and Romania's Schengen accession at the end of last week, and Finland did so on Wednesday. The vetoes on the Schengen Agreement bids of the two Balkan states have been formally turned down at the long-anticipated sitting of the EU Interior Ministers on September 22, 2011.

“The Netherlands and Finland remain the only two EU states which did not support today the proposal for Bulgaria and Romania's accession to the Schengen Area. They failed to provide a logical explanation for their position,” Bulgaria's Interior Minister Tsvetan Tsvetanov stated after the meeting of the Interior Ministers in Brussels, as cited by BTA.

“With this decision we are entering into a Catch 22 situation,” Tsvetanov added.

He stressed that the Netherlands and Finland have ended up “in isolation” because of their opposition to Bulgaria and Romania's Schengen entry, since all other EU member states, including France and Germany, have accepted the “compromise” solution suggested by the Polish EU Presidency that Bulgaria and Romania be granted “partial” accession to the Schengen Area (i.e. with respect to sea and air borders travel.)

The Bulgarian Interior Minister further explained the “additional consultations” at the ambassador's level with the representatives of the Netherlands and Finland have failed to yield any results.

Tsvetanov did emphasized, however, that new talks on the Schengen fate of Bulgaria and Romania are expected by October 17-18, when the EU state leaders will meet at a regular summit. He believes that a decision can be made in the meantime if a compromise is reached.

The Dutch and Finnish vetoes are an expected development in spite of Bulgaria and Romania's hopes and the outstanding efforts of the Polish EU Presidency that the two countries should be granted at least “partial” or “two-phased” Schengen accession – i.e. accession with respect to sea and air travel only for the time being.

The Polish EU Presidency had already made it clear ahead of Thursday's meeting of the EU ministers, whose outcome was predetermined, that Poland will do everything possible in order to find a solution about Bulgaria and Romania's Schengen fate before the summit of the EU 27 state leaders, i.e. the European Council, scheduled for October 17-18, 2011.

Bulgaria and Romania were originally expected to join the Schengen Area in March 2011 but their accession has been put off for an unknown period of time, primarily because of political opposition by key EU states focusing on their rule of law situations.

Bulgaria has already threatened “counter-measures” if its Schengen application is treated “unfairly”, which boil down to “reconsidering” its support for the Schengen reform legislation.