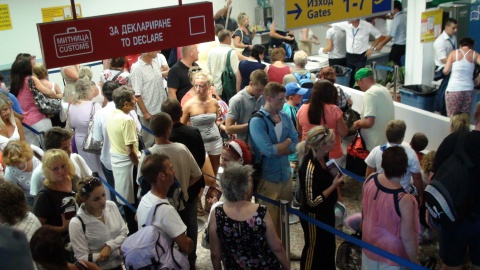 Bulgaria Air cancelled 4 flights booked by Alma Tour for Russia and Finland, due to what it claims is a EUR 3.5 M debt on the part of the tour operator, leaving 1 000 tourists stranded on the Black Sea coast. Photo by BGNES

Even though the conflict between the two companies is purely intercorporate, it can still be probed into, Margarita Nemska, spokesperson of the Sofia Prosecutor's Office, has pointed out, as cited by Pari.

500 Russian and 180 Finish tourists were stranded at the Black Sea airports of Burgas and Varna after Bulgaria Air, Bulgaria's national airline carrier and heir to Balkan Airlines, cancelled Friday and Saturday 4 flights to Moscow, St. Petersburg and Helsinki that were booked by the Bulgarian tour operator Alma Tour, who according to the airline owe them some EUR 3.5 M.

Part of them were able to return home on a flight paid for by the Russian tour operator and on the Bulgarian government plane, ordered by Bulgarian PM Boyko Borisov to be flown to Burgas to aid in the transportation of the neediest, such as children, pregnant women and people who might be ill. The craft with a capacity of 90 transported about 200 of the initially nearly 1000 tourists Saturday.

Among conflicting reports on the exact number of tourists, remaining in Bulgaria, it is also unclear how they will get home.

According to the largest private TV channel bTV about 400 tourists, including 170 from Finland still could not board a flight home as of late Sunday evening.

Bulgaria Air announced mid-day Sunday that it is resuming flights to Russia and the Baltic Republics for tourists of Alma Tour Fly, despite the ongoing dispute with the tour operator Alma Tour.