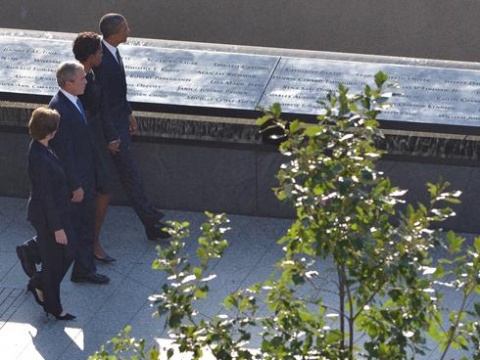 Obama also joined precedessor George W. Bush, as they and their wives held hands while along a wall etched with the names of those who died at the World Trade Center on Sept. 11, 2001. Photo by BBC

The ceremony marking the 10th anniversary of the September 11 attacks in lower Manhattan has begun.

The city is observing the anniversary today at the National September 11 Memorial at the World Trade Center site. The ceremony is also serving as the memorial's official opening. The site opens to the public Monday.

US President Obama joined predecessor George W. Bush at Ground Zero to begin a day-long series of tributes to the thousands who died on 9/11 and the millions who will never forget.

Obama, Bush, and their wives held hands while along a wall etched with the names of those who died at the World Trade Center on Sept. 11, 2001.

The president opened the ceremony at Ground Zero at 8:46 a.m., the time at which a first hijacked plane struck one of the twin towers.

Obama read a passage from Psalm 46: The Lord of hosts is with us; the God of Jacob is our refuge."

Later in the day he will also visit Shanksville, Pa., and the Pentagon near Washington, D.C.

The president prepared for today's services on Saturday by visiting Arlington cemetery, volunteering at a Washington food bank, urging supporters to devote more time to public service -- and conducting a national security meeting about terrorist threats on this somber anniversary.

Obama "directed his team to pursue vigorously all threat information and to ensure a heightened state of vigilance and preparedness as we commemorate the anniversary of the 9/11 attacks," said a White House readout of Saturday's national security meeting.

"The President also stressed that the United States must not relax its counter-terrorism efforts in the weeks and months that follow, as the safety and security of the American people must be a daily priority for all departments and agencies," the White House added.

The president and first lady Michelle Obama begin today by traveling to New York City to attend a 9/11 commemoration ceremony at the new September 11 Memorial, where the twin towers of the World Trade Center once stood.

The Obamas then journey to Shanksville, Pa., for a memorial ceremony honoring the passengers who died in the crash of United Flight 93 after fighting back against hijackers.

Later this afternoon, the Obamas will attend a wreath laying ceremony at Pentagon, also attacked ten years ago today.

Obama wraps up the day with remarks during tonight's "Concert for Hope" at the Kennedy Center in Washington.

In an e-mail Saturday, Obama urged supporters to honor the memory of those who died on 9/11, and U.S. troops fighting on the front lines. "But," he added, "I also hope you'll remember how the worst terrorist attack in American history brought out the best in the American people. "

"From giving blood, volunteering time, and donating clothing, food and money, in the weeks and months after the attacks, we were united as a nation, everyone doing their part to lend a hand and help the country move forward together," Obama said.