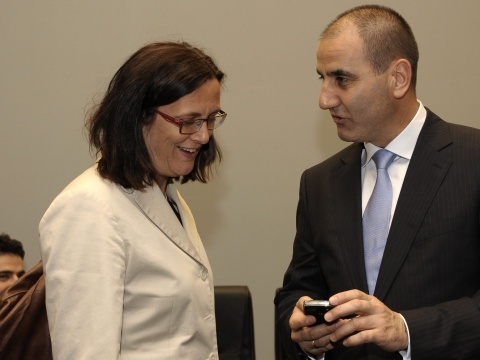 The decision about Bulgaria and Romania's potential Schengen membership will be taken on September 22, Bulgaria's Interior Minister Tsvetan Tsvetanov has stated.

"It would be nice if the Justice and Home Affairs Council takes a political decision to remove the air and water borders first, and the land borders, too, on a later stage," Tsvetanov told the Bulgarian National Radio Wednesday.

The Minister pointed out that one more European Commission report on Bulgaria and Romania should come out before conclusions could be drawn on the two EU newcomers' accession to the Schengen Agreement, adding he believed they may join the border-free zone in July 2012.

According to Tsvetanov, there are worries that the two Balkan countries may face migration pressure from the Middle East and North Africa through Greece and Turkey.

On Wednesday, Tsvetanov participated in a conference entitled EU Migration Policy in the Light of the Schengen Enlargement, where he presented a report – Bulgaria on the Road to Schengen. It includes information on the National Strategy in the Area of Migration Policy, Sheltering and Integration 2011-2020, which was approved by the Bulgarian cabinet in February, 2011.

On Tuesday, a spokesperson for European Commissioner for Home Affairs Cecilia Malmstrom clarified for the media that the European Commission only has a consulting role when it comes to Schengen enlargement. The Commissioner, however, had made several statements in support of the Bulgarian and Romanian membership.

It is expected that by the end of the month, the EC will be ready with its proposal for amendments to the Schengen Code, which will allow a temporary reinstatement of national borders in case of emergency situations.

On Wednesday, Luxembourg PM Jean-Claude Juncker, who is on a visit to Bulgaria, stated the country has done a wonderful job in meeting Schengen criteria and must join the free movement area as soon as possible.